Every nerd loves a good tech war: Windows vs Mac, Apple vs Android, Intel vs AMD. They give us something to armchair argue about over beers with friends—or to rant over in the comments of illustrious tech blogs. After spending the weekend playing with AMD’s new Vega 64 and Vega 56 graphics cards, I think I can safely say an old tech war is back on—even if AMD’s latest salvo feels paltry. Nvidia might be leading the discrete graphics card industry, but AMD’s two newest cards are cheap and fast enough to finally compete. And that can only mean good things for PC users. 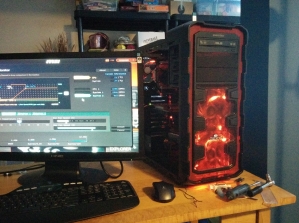 AMD, which purchased Nvidia’s previous competitor, ATI Graphics, has been losing the GPU war for a while. Nvidia is currently producing the majority of discrete graphics cards found in computers today. According to Jon Peddie Research, by the end of 2016 Nvidia had more than 70-percent of the discrete graphics market. AMD trailed far behind with just 29-percent. So AMD decided to focus on building cheap cards to go in cheap machines—like the 550 I reviewed back in April.

The AMD Vega 64 and Vega 56 are an attempt to lure people away from the ~$600 Nvidia 1080 with cheaper options that start to approximate its performance. When the Vega microarchitecture the cards are based on was announced back at CES, people didn’t immediately leap out of their seats. AMD didn’t have a cool hook like when Nvidia announced it had spent “billions” to develop its latest card. All AMD had was a promise of speed when the cards arrived this summer.