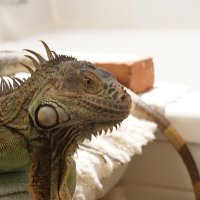 The green iguana is arguably the most common reptile in the pet trade today. Green iguanas are readily available and almost one million are imported into the United States annually as babies. It is true that these wonderful lizards make personable pets, but very few people who purchase them can meet the requirements of an adult green iguana.